I really do think that making vegetable soup can kick start or revive the healthy eating habit.  These  soups are reassuringly easy to make, they taste great and the ingredients are easy to come by and affordable.

There are loads of recipes about for the three vegetable soups I have chosen.  I have deliberately gone for simplicity – you can create a good tasting soup with few ingredients and no fuss.   And it being January – the month of waistline anxiety -I’ve omitted using cream or cream substitutes.  Cream has it’s place and even though saturated fat has been rescued from the wilderness of nutritional evil where it has languished for the last 30 years ago, it is still calorific.  So cream can wait for February. 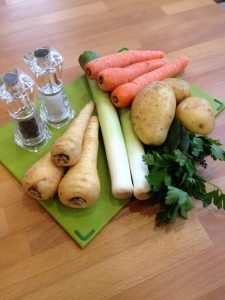 Boil the parsnips in most of the vegetable stock until they’re soft enough to be blended up into soup.  Blending is best done in the saucepan that you’ve cooked the vegetables in, placed on a work surface, and using a hand blender.  If you’ve used a big enough saucepan there will be plenty of room and much less washing up then if you use a food processor.  (And an electric hand blender is only a fraction of the price of a blender.  January is a lean financial month but I found blenders for as little as £5  Click here for more details or click here.

What is the right consistency?  Well there isn’t a strict rule but this kind of soup needs to be on the thick side .  That will give it its hearty quality and hold the flavour well, not to mention giving the soup a creamy consistency that is created entirely without the addition of cream, fromage frais or crème fraiche.  So go easy on the liquid .  Start thick and add extra liquid as required.

How much curry powder? Well firstly, is the spice blend hot, medium or mild?  Beyond that, it’s entirely personal.  I add loads, because I like a strong, spicy taste but a hint of curry powder would work just as well and allow for the delicate flavour of the parsnip to come through.    Taste it, preferably when it’s cooled a little,  and have the courage of your culinary convictions!

The whole enterprise is a really inexact science.  Not science at all in fact, but it will still taste good.

Lightly fry off the chopped leeks in some oil.    These days I do most of my frying in coconut oil because it is heat stable, but if I want a bit of extra taste, then I  use butter.

Add the chopped potato and half of the vegetable stock and simmer the whole lot until the vegetables are soft.  Blend the mixture with the hand blender, adding extra stock as you go to achieve the right consistency

Add the dill and blend again.  How much you add is up to you.  Taste the soup and decide.

Finally add a little salt to bring out the flavours.

It’s easy to miss the odd piece of potato so give the soup a good stir, especially if you have feeding it to somebody who doesn’t like lumps in their food 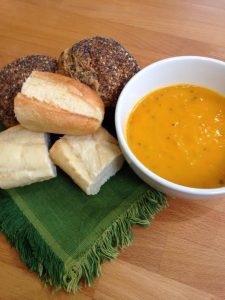 Gently fry the coriander seeds in a little cooking oil.  Seeds burn easily so keep an eye on them.  Next add the onion and fry that until soft.  Add the carrots, simply to start off the cooking and coat them in fat.

Add around a pint of water and cook the vegetables until they are soft enough to blend to soup consistency.  Some of the water will go during the cooking process so you’ll need to add more to get the right thickness.

Add the chopped fresh coriander and blend again.   The coriander seeds will flavour the soup but the fresh herb gives another depth of flavour.  How much to use?  Again, it’s hard to say.  One ounce is a large handful.  You could definitely get away with less, especially if you add a decent pinch of salt.