Strange though it might seem this is not a straightforward question.  It means totally different things to different people, including teachers

I’m going to start with a quick bit of history.  Joseph Pilates outlined this Mat based exercise system, known as Contrology in his 1945 book “A return to Life through Contrology”

Contrology is the complete coordination of the body, mind and spirit. Through Contrology you first purposefully acquire complete control of your own body and then, through proper repetition of its exercises, you gradually and progressively acquire that natural rhythm and coordination associated with all your mental and subconscious activities.

Contrology is designed to give you suppleness, natural grace and skill that will be unmistakably reflected in the way you walk, play and work. You will develop muscular power with corresponding endurance, ability to perform arduous activities, to play strenuous games, to walk, run or travel for long distances without undue body fatigue or mental strain. 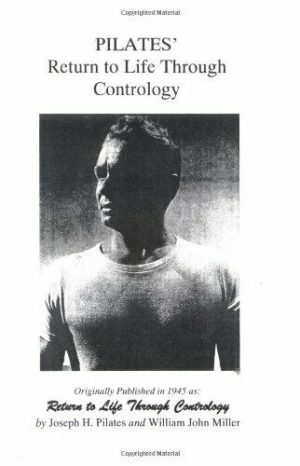 My definition is a little more prosaic! Above all, it is an exercise method which aims to enable the practitioner to move better. Many people rightly think of Pilates as associated with posture, and movement is, in essence, dynamic (moving) posture. Joseph Pilates was decades ahead of his time when he claimed in the 1950s that modern lifestyle, inefficient breathing and bad posture are at the root of bad health.

The more Pilates I do, the more training I undertake and the more reading around the subject I do, the more I have come to believe that good movement is vitally important and something of tremendous importance that Pilates can deliver. Although the movements you do are performed by your body they arise from the mind and body and breath working in harmony and that harmonious connection is hugely valuable.

Almost nobody has the time every day to work towards the level of mastery that Joseph Pilates felt was necessary for the good practice of Contrology. I certainly don’t! Nevertheless, doing Pilates regularly has led to changes in my body, and for the better: my walking is better, my running is dramatically better. My body is more supple and I’m strong enough to tackle all my daily activities. If only it took away wrinkles… or even fine lines…

Joseph Pilates developed  34 exercises which he stipulated had to be performed in the same order each time, from  1 to 34

They are amazing exercises and give you a full body workout.  The teaching of Pilates as per his method is known as Classical Pilates and despite it’s classical heritage it still carries with it changes, variations and modern additions

The contemporary vs classical schism (and there is one)  is very much a US preoccupation.  In the UK pretty much everybody is contemporary but we vary to the extent that we reflect, teach or revere the heritage

Where do I stand?

I am definitely Contemporary.   The 34 original exercises are extremely demanding and suitable only for those with supple, flexible and injury free bodies.  Of course you can embark upon them if injured but it requires hours of weekly input with a tutor to achieve mastery.

I take the more realistic view of meeting the body where it is, and modifying the exercises to enable each body to move, move well, and get to place where it is more supple, more strong and less prone to injury or more rehabilitated.  This means that you can get to work and achieve something straight away, without needing to wait weeks to get good enough to even attempt a Classical Exercise

This is question of philosophical leaning.  All Instructors who are devoted to their art, want the best for your body, regardless of the journey that they take you on

Ensure your teacher is fully qualified with a Level III Diploma.  Ensure that they haven’t simply done a basic online course with no face to face tuition or assessment, or a face 2 face course that only lasted for 2 weekends.  Both  exist and the latter really should be referred to as Fitness Pilates.  The aim of Fitness Pilates is to teach a simpler version of Pilates, generally in Gyms  to  younger, fitter groups of people.  The same thing exists in Yoga too.

Of  course experience counts for something but we all have to start somewhere.  For me, the basic training is critical and ideally your tutor should embark on consistent continuing professional development, (CPD).  Without the lingo: ongoing courses and training

What kind of Pilates will you get from me?

I use Pilates Matwork, the Reformer, Spine Corrector and Wunda Chair in my studio and of course, when teaching Group Exercise, it is solely Matwork.  I have a background in Gym Instruction and I also tend to bring in Strength training with weights, bars and Therabands to use in Matwork.   I use various types of stretching too.  Essentially I am drawing on a toolkit of exercises to improve movement and function.

I truly believe in “meeting the body right where it is and making it better”.   So, we start with what the body can do, and proceed from there, depending upon what your goals or requirements are.

The history of Pilates, and in truth, the history of exercise in general is not fat positive.  On the contrary, sadly.     There is quite lot of fat people in the UK and yet we are blatantly and publicly  obsessed with the so called obesity epidemic.  Fat shaming is the norm and  diet culture is insidious and frankly (in my view) out of hand.      I meet a lot of people who blame their weight on their pain or injury problems, and I suspect that there are many people I never meet because they believe that Pilates is not for them because they are fat.     I would like to explicitly state that, (whilst normal body weight myself, yes I’m caught up in the desire to be thin)

If you are fat you are very welcome to my classes and my studio.

You will not be judged for your weight, and nor is your weight a barrier to moving better

Believe me, there are plenty of other barriers shared by the entire population in our sedentary, chair based culture but somehow they don’t cause the same anxiety or have the same emotional impact because they are not so personal or associated with blame or guilt

I have written about this is a blog post which you can read here: https://www.pilates-leeds.com/fat-in-january-how-i-discovered-fat-activism-and-now-aim-for-fat-positive-pilates/

Not Forgetting the Pilates Machines

Remarkably, Joseph Pilates also developed machines and the original versions of these were in his New York studio.  The most famous and now most widely available is the Reformer and this was developed first.  In addition there is

The Cadillac aka the Trapeze Table,

Barrell collection including the Ladder Barrels and Spine Corrector

The Guillotine (much rarer)

The designs have altered slightly over the years and indeed they have been used as the basis for completely new pieces of kit, not described as Pilates.

Who was Joseph Pilates? 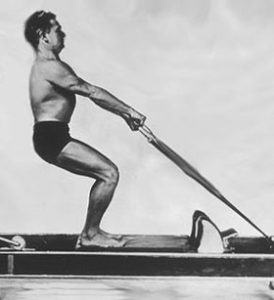 He was born in Germany in 1883 in Munchengladbach, one of nine children and during part of his childhood his parents ran a gym. As a youngster he was often poorly and suffered from some significant health problems such as asthma and rheumatic fever. However, he dedicated himself to improving his physical strength and his health. He did this initially by trying out a variety of practices, including: yoga, gymnastics, dance, circus training, weight training, martial arts and self-defence. Sadly, Joseph Pilates was bullied as a child which may have influenced the interest in self-defence. He became sufficiently skilled in physical fitness that he could earn a living as a boxer and a circus performer and this brought him to the UK.

The First World War broke out when he was in the UK and as a German national, Pilates was placed in an Internment Camp, firstly in Lancaster and subsequently on the the Isle of Man. Here his interest in health led him to help out in the camp’s sick bay. He had already spent much time developing his own, new, exercise system but now he further refined it by inventing his first equipment using the hospital bed as a base and attaching levers, springs and pulleys to exercise muscles against variable resistances. These early prototypes became what we know as the Trapeze Table and Reformer. 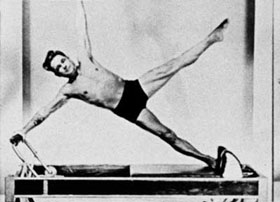 He emerged from the World War One with the basis of the exercise system which he called Contrology. He returned to Germany and taught physical fitness and self defence to the Police in Hamburg. There was work available to him in Germany but unhappy with the prevailing political situation he decided to go the US. It was on his second visit there that he stayed for good and on his second boat trip he met his life partner, Clara.

Together he and Clara set up a studio in New York to teach this new method of movement. Among their first clients were elite dancers needing rehabilitation following injury. The dancers in particular had an influence on the further development of the method. Joseph Pilates taught in the studio until 1966. He died in 1967. Clara, a skilled teacher in her own right carried on teaching until her death in 1977. Contrology was then carried on by a dedicated band of his followers who had also become teachers and who carried on teaching his system, which came to be known, not as Contrology, but by his name.

Pilates has carried on evolving. Not only do we have the original matwork exercises and exercises for the studio equipment, but the method can be applied to new exercises done with the right approach – mind/body training leading to good, thoughtful movement. Pilates has absorbed the latest research in biomechanics and anatomy which has further influenced development.