Less of the low sugar shenanigans now: it’s time to start thinking about Christmas presents – the home made variety.  Just thinking for now, not making . The fudge will last, but only 2 to 3 weeks (and longer in the fridge ) so have it freshly made if possible. 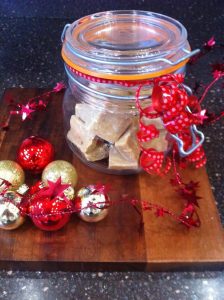 Advantages of making your own fudge 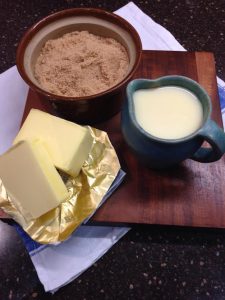 There are loads of recipes out there that differ slightly and I think that says something about there elasticity of the recipe and it’s capacity for delivering a tasty end product.  I tried out ones based on Evaporated Milk, Condensed Milk and double cream.  The one I found to be the easiest was this, for Vanilla Fudge:

Place all of the ingredients except the vanilla into a (preferably heavy bottomed) saucepan.

Let the mixture start to boil and then stir intermittently over a medium heat until it reaches the right temperature.  Make sure that although the mixture bubbles away nicely, it doesn’t burn.

It is extremely hot!!!!   Beware a cheeky taste.   Let it cool first or it will burn your mouth.

Wait until the temperature is 115 or 116° C.    Be patient. Watch, stir and use the thermometer.  At less than 115°C the fudge will be quite soft and at less than about 111 °C and it probably won’t set at all (although it will still be eminently edible as it morphs into toffee sauce)   At more than 116 °C and the fudge will become more brittle.  Over 122 °C and again, it will be eminently edible but more like toffee.

Once it’s off the heat, beat the fudge for about 5 to 8 minutes.  After it has cooled a little you can add your “extras”  – in this case it is your Vanilla Extract – and then carry on beating.

Well, you could have a great time inventing your own .

My recommendations would be

Ginger Fudge: add chopped stem ginger to the mixture.  the added sugar on the pieces of sugar doesn’t seem to make it too sweet.

Peanut Butter Fudge: add crunchy peanut butter .  You need quite a bit to get the taste to come through over the sweetness of the fudge mixture.

Brazil Nut Fudge: or any nut with a bit of flavour – pecan or hazelnut.  Buy whole nuts and chop them yourself because the flavour is so much better that way. 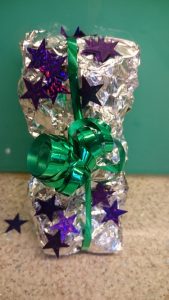 Well it’s an extra job in its own right really.  I’ve taken to saving useful looking boxes and jars that I then decorate with wrapping paper tissue.  Place the fudge within a sheet of greaseproof paper or aluminium foil though because you don’t want the ink from the packaging touching the food.   If you’ve no suitable boxes, after all they need to be fairly small… then make a virtue out of necessity and use a bit of greaseproof and then use aluminium foil as the outer wrapper because it has a bit of structure to it.  Add some ribbon and maybe a dab of glitter  and bob’s your uncle!

Or should that be try not to enjoy