Number One :  Where is the lower back? 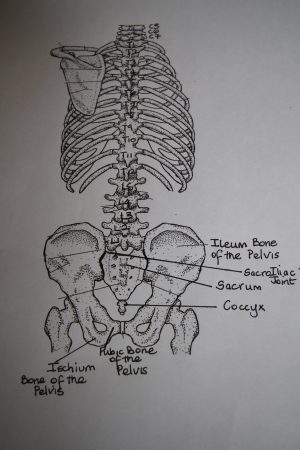 Our sense of the lower back is often a bit vague and it depends upon whether you think of your “back” as your spine or the back of your body in general.  For this piece I’m talking about the spine.

The individual bones of the spine have their own special name: each one is a vertebra, plural, vertebrae.

The human spine has 7 cervical, 12 thoracic, 5 lumbar, and the fused sacral vertebrae and at the end, the coccyx or tail bone.

The lumbar region of the spine  starts roughly behind the belly button – quite high up.  Not at all what we think of as the lower back!

Number Two:  What Muscles and Nerves are associated with the lower back?  And what’s all this about discs?

In between the vertebrae are the inter-vertebral discs.  The lumbar discs, like the bones are big ones.  Their function is to provide shock absorption: To cushion and dissipate the forces acting 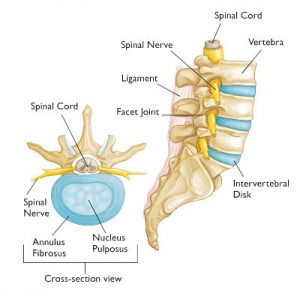 on the bones, and, to assist with the smooth movement of the spine. The discs compress and open depending upon the direction of spinal movement

We don’t take much notice of the discs until they develop a problem, and a common problem in the lower back is a disc bulge.  Here the disc pushes out into the surrounding tissues where it can cause pain and discomfort, especially if the bulge presses onto a nerve.

The picture on the right shows 3rd, 4th and 5th lumbar vertebrae, the Sacrum and the base of the spine: the tail bone.   With the bird’s eye view on the left you can see the spatial relationship of the bone, the disc and the spinal cord in the middle from which the nerves branch off.  The complex structure of the vertebrae is also clearly seen.   The finger like projections on each bone provide an attachment point for many of the muscles

The picture below is quite detailed but I have chosen it because it really does give a really clear view of the number of nerves that exit the spine in the lumbar region.  It also shows the nerves exiting and then blending together.  At the top of the picture is the bottom rib so you can see just how high up the body the lumbar spine starts. 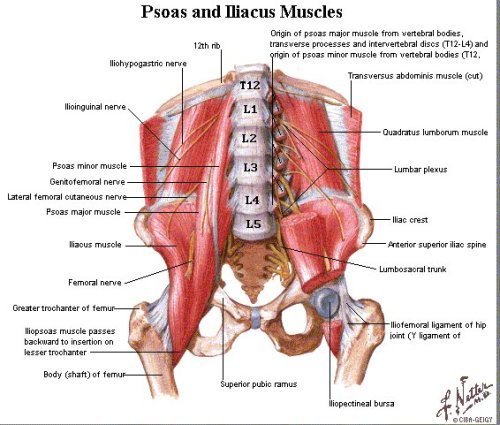 Firstly there are lots of little ones that stabilise the spine across small distances, often between each vertebrae.  They are the Insterspinales, the  Intertransversarii  the Transversospinalae group.  Of the latter, 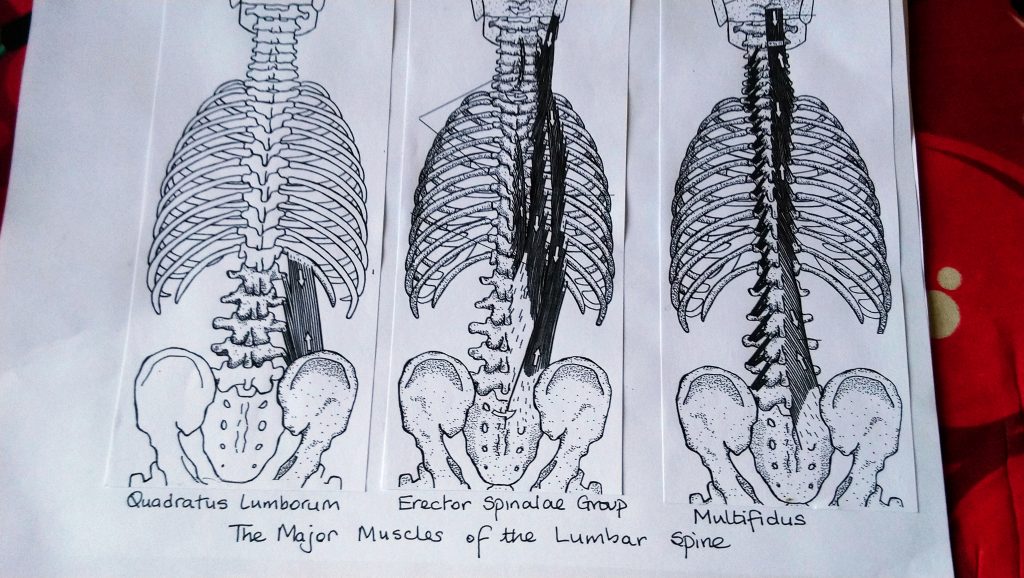 the biggest is the Multifidus which is a  major stabiliser of the spine and considered to be part of an inner unit of core muscles.

There is a set that attach broadly parallel to the lower back: The Errector Spinae Group. They curve the spine back on itself and assist with stability

The Latissimus Dorsi (not shown here) of the upper and mid back attaches onto the lumbar region via a sheet of connective tissue called the Thoraco-lumbar fascia.

The Latissimus Dorsi has an upper body strength function but also assists in sustaining our upright posture.    This is not something we generally consider but it is quite profound  – how do we actually stand up?  What keeps us there, teetering upon the narrow base of our feet?     We are actively held upright by resting muscle tone in the back of the legs, the buttocks and right across the back of the body.

The Psoas is the only muscle in the body which joins the lower body to the upper body.  It is absolutely vital for force transmission, stability, and in bending the spine forwards on itself.  The Psoas also lifts the leg up at the front (hip flexion).  It is clearly shown  in the picture above,  of the nerves.

There is a set of muscles that join the lumbar vertebrae to the base of the ribs: Serratus Posterior.  Their function is primarily to assist breathing rather than to move the spine.

Number Three: What does the lower back actually do?

The spine provides an upright structure upon which everything else can hang. This is the limbs & pelvis, the rib cage heart & lungs, the abdominal organs and (last but by no means least) the head.  The lower back  is the biggest and strongest area of the body because it carries the most load – the whole of the upper body.  The force generated by the movement of the legs has to pass through the lumbar region so that the whole body moves.  The lower back manages, transfers, carries, moves serious amounts of load on a daily basis, over a lifetime

The lower back can move : it can bend forwards, bend backwards and bend to the side thus “taking” the body where it wants to go.

It provides protection, at the back of the body, of the delicate internal organs

It provides a route through which the nerves can effectively flow, to and from the spinal cord.

I am stating the obvious in some ways, but it is worthy of our reflection:

Without the optimal function of the spine, we compromise everything else.

Number Four: What should it not do?

It should not be stiff.

A healthy back is supple and easily movable.  If the lower back is stiff then in order to move, the body is forced to move something else instead, as a substitute.

Very often,  the junction of the first lumbar vertebra and the final thoracic one is a hot spot of “over movement”.  It lies in between the under-moved, stiff lumbar spine and the under moved, stiff thoracic (upper) spine.  It is extremely common for people to feel sore and tired at this position. known as the lumbo-thoracic junction , or T12/L1,  because  it is so overworked

Sometimes full body movements don’t fully happen because the lower back won’t move properly.  Overall there is simply less movement.  For example, getting on and off the floor is primarily an activity that happens in the legs but there is also some bending of the body that is required and when the back is really stiff then a basic human movement – that of getting on the floor is far more difficult than it should be, or impossible.

Tight hips can disrupt running because the tight front muscles prevent the gluteals and hamstrings from working effectively at the back of the body.  Again, the lower back can substitute for the ineffective buttocks, making running less efficient and over working the back and making it feel sore.

It should not really be forced to accommodate long periods of sitting.

The lower back is best served by movement: plenty of walking.  The forces across the spine are for more favourable in a standing position compared to sitting.

The lower back health is aided by a variety of movement in different planes, so not simply bending forwards and backwards, although that is a good start.

Often prolonged sitting can lead to a tendency to curve or slump into the lower back.  This disrupts the alignment of the lower back discs and vertebrae and increases the pressure on the discs.  They are designed to withstand big loads over long periods . Humans are designed to move, push, pull, squat, reach, walk, run, squat constantly over their waking hours.  Sitting is fine but not for long periods of the day or over our lifetimes.

Number Five: How to care for your lower back

Ideally the body should move in a variety of ways, constantly and regularly.  Repetitive movement can increase the likelihood of asymmetry in the body, weakness, tightness and increases the risk of injury.

In really simple terms the spine needs to stay mobile and be worked through its full range of motion in bending forwards, backwards and sideways.

The opposite notion is one of trunk stability.    In some ways stability work compliments mobility work.   With stability, the limbs move but the spine is stable – preventing unnecessary overwork in the spine.    In this regard keeping the shoulder and hips freely moving and preventing tightness will help keep the back healthy

To keep the discs healthy then spinal alignment is the focus.  Work to maintain the ideal curve of the lower back. This is the position where the disc and vertebrae have maximal congruence and minimal strain.  It is not a place were the spine stays for long – stock still and straight, but it is a vital reference point and when standing, or sitting, it is worth taking the time to assess whether we can achieve the ideal curve, sometimes known as neutral spine.

So lots of Pilates then?

Pilates is certainly a great way to move the lower back but you could do other things, but bring to bear the same principles – mobilise the spine, align it correctly and keep it stable then the limbs are working, or example, in weight training, or when doing lunges

There is T’ai Chi, Yoga or even a stretching routine of your own invention.  Quite often the body “knows” which stretch it needs you to perform!

Gym sessions are potentially ideal, as long as you take care with alignment, correct form and resist the temptation to lift too much weight.

Regular walks are ideal to prevent prolonged sitting and to benefit the body in many other ways too.

Manipulation of the spine

This is a  technique that treats back pain (and neck pain and other musculo-skeletal conditions) via the application of force to the joints.  The purpose is to restore the spine’s structural integrity, reduce pain and initiate the body’s natural healing processes.  It is generally performed by Osteopaths and Chiropractors

Microdiscectomy: if a disc is bulging to one side then part of the disc will protrude out from beyond the edges of the bone.  Partial disc bulges are fairly common but can be hugely problematic if they press on nerves.    If no other treatment has been successful to alleviate pain then microdiscectomy is considered.  The surgeon “shaves” off the protruding element of the disc but leaves the remainder intact.

Spinal fusion – recently back in the news because this is the procedure that Tiger Woods had.  If the inter-vertebral disc wears out to the extent that you have one vertebrae partially rubbing on the neighbouring  bone, the nerves can get compressed at the exit points and cause severe pain.  In the fusion procedure, two vertebrae are fused together to make a single bone. Although the movement around that part of the spine is reduced, because there is no gap in between the bones,  the damaged, bulging disc can be removed completely.

This is to passively release tight muscles which can be sore and prevent the spine from moving freely or moving properly.     It can be really effective at freeing off the back and often feels great as well!    As well as using a Massage therapist, one can self massage using a foam roller or spiky massage balls.