The World of Pilates is not very Fat Positive

I don’t think that sentence is terribly controversial is it?  The world isn’t a very fat positive place and Pilates , well.. For all its marvels, benefits and body changing miracles has a diversity problem

When I am feeling particularly pessimistic I would accuse Pilates of being implicitly fat phobic, non inclusive, of promoting unrealistic aesthetic standards.   The normal instructors teaching normal people are all out there but it’s not the prevailing aesthetic is it?

#Pilates with added Cellulite.    Do you think it will catch on?

#notinacroptop.  That one actually exists.  I created it together with a friend of mine.

My experience of the industry, viewed online, on magazines, at training events, on Social Media is overwhelmingly of young, thin white women.  The most popular aesthetic in images is of being scantily clad and often with a cropped top with visibly toned abs.  I have always found this disturbing, and depressing.  Not shocking though.  Not in the slightest because I have come to expect it

The Profound Consequences of the Death of George Floyd

The death of George Floyd tragically but, on the other hand, amazingly, has sparked demand and desire for real change.  Black Lives Matter as a concept and a rallying cry now has its loudest ever voice.  It has encouraged the white community to listen more carefully,  sparked protest and subsequently prompted organisations, groups and individuals to question racism, diversity and bias.

Hey presto!  Lots of people of BAME ( that is, black and minority ethnic) origin have suddenly appeared in advertising etc.  In fitness and Pilates the young thin white women have been partially replaced by young thin BAME women and sometimes thin young men.  However I still feel frustrated because I just thought: “You really don’t get what true diversity and inclusion means”.

Where are all the older people? Fat people? Differently abled people?

Black Lives Matter and Other Aspects of Diversity

I completely understand that I could get accused that this point of ruining the strength of the BLM struggle by “diluting” it with other elements of a diversity and equality struggle.

Truly I don’t,  but I do think that BLM shines a spotlight on the situation of -isms that exist in plain sight.   These -isms  are a consequence of something that is JUST SKIN DEEP

My Experience of Diversity in Pilates

In all the years I have been teaching and that is pretty much continuous since 2004, I rarely encounter fat people in my classes.  I suspect that fat people don’t feel welcome or, worse, fear ridicule

In mainstream classes, sadly it is very hard to accommodate people who cannot get down to the floor and I’ve had to turn many people away over the years for that reason

Affordability is an issue, just like in other aspects of life. I’ve talked about this in another post that you can read here: https://www.pilates-leeds.com/i-teach-pilates-does-that-make-me-a-wellness-practitioner/

Ideas about what Pilates is for affects who actually turns up to classes.  This is no ones fault perhaps but Pilates is often seen as a “celebrity ab workout” by many and some classes are like that.  I used to call it posh BLT!

People who need a more rehab based approach, or just things to be less intense maybe don’t realise that Pilates can be there for them.  That message is drowned out by the louder “work your core” “Pilates for a flat stomach” message.    Core strength?  Don’t get me started, or maybe…https://www.pilates-leeds.com/core-strength/

Over the years I’ve noticed that if I teach in a mostly white suburb then I get mostly white people.  If I teach in a mixed suburb I get a mixed group.    Geography matters. With my 1:1 work it is overwhelmingly white.  I cannot know for certain about whether the issue here is more of a wealth issue first and foremost, or a racial “1 to 1 Pilates is not for people like me”  thing. It could be an intersectionality of money, class and race.   I simply don’t know.

It simply is not as popular as it is with women.  Again, the marketing is of young women. Men are not seeing images of men doing Pilates so they, along with older people, fat people, disabled people are being told it is not for them.

Sexuality is not really a primary driver of Pilates vs not Pilates but gender might be.   Pre Covid I ran women only and men only classes knowing full well that it did not really sit well in a non binary world.  The reason I did Women Only was to provide a safe space for women of South Asian heritage who did not feel comfortable doing exercise in a mixed environment. I ran the men only classes because often men don’t want to do the same kind of Pilates or even do any Pilates in the presence of bendy, supple women.  I was caught in the trap of helping out one group at the expense of another.   Covid has ruined it for the time being.  If I relaunch I know  full well I can be accused of discrimination and my only line of defence is trying to be culturally sensitive  whilst still offering open classes as well

Over the years I have taught Pilates I have learnt about the sheer number of things we do as a society  which affect health: being too sedentary, too much sitting, not enough walking, too much time spent on the phone, lack of sleep, failure to load our bones sufficiently, too much repetitive movement with not enough variety.     It goes on and on.  Disproportionately we obsess about obesity and the so called “epidemic”.   Why does no one talk about an epidemic of lack of sleep, or poor shoe disease or a syndrome of the sedentary life?       Medicalising fat, hounding it, hating it  and haranguing it allows thin people to laugh all the way to the metaphorical bank

Years of teaching Pilates and learning about movement, alignment and anatomy has taught me a thing or two about knees and walking.   Lots of things mess knees up.

Loads but overweight people are refused surgery on the grounds of their weight.

When was the last time you heard about a thin person being refused knee replacement surgery because their ankles were tight because they sat in a chair for too long every day?   Or because they wear high healed shoes.   Believe me, this is a significant issue for knees.   Knees  don’t wreck themselves.  If you have a knee issue cherchez la ankle and cherchez la hip.

I have lost count of the number of people who have told me that their back pain is their fault because they are fat.

No one has ever blamed their pain on being thin.   The causes of back pain are various.  Some are complex and some are simple.  Some even involve sitting in chairs and you’ve guessed it, wearing iffy shoes.

I have become concerned about the fat shaming of people with various medical issues and then on top of that,   self fat shaming.   Working in the fitness I’m in the centre of an industry that should be able to help but somehow it also hinders true equality and exercise for all.

I was huffing and puffing over all of this and then I stumbled on a book about being Fat. I found it by chance and it piqued  my interest because a friend had recounted days earlier, an embarrassing encounter in an MRI machine that was too small to fit in.  She is about a size 22 so nothing out of the ordinary.

Incidentally in the vocab of fat activism a really fat person is “infinity Fat”.  There are nuanced descriptions for all different levels of fat.  Of course. I do mean Fat

Fat activists are  working in every sphere to promote equality for Fat people and that includes the vocabulary we all use.  They are fighting for change, one word at a time.  Consider the subtle impact of morbidly obese vs infinity fat.  Who doesn’t prefer the latter?  Come to think of it, the difference isn’t even subtle: the use of the word morbid with connotations of badness and death, the medicalisation of the description, the obvious negative meaning.

Fat is the opposite of Thin.  No emotional baggage.  Quaintly binary in our non binary world.     Anyway I  digress.

To say the book was an eye opener in an understatement

I was at times almost moved to tears by the matter of fact descriptions of the daily hardships, microaggressions and discrimination suffered by fat people.  Here are just a few

These discoveries have led me to a more visceral understanding of Privilege.

The notion of Privilege is very tricky.  If you ask someone to describe a privileged person than they’d perhaps describe someone who is rich, no apparent concerns or difficulties, big house, all the trapping, personal wealth etc.    However in discussions over inequality Privilege is defined as:

a theory of special advantage or entitlement, used to one’s own benefit or to the detriment of others. These groups can be advantaged based on social class, age, IQ, disability,  ethnic or racial category, gender, gender identity, sexual orientation and religion

This definition is from Wikipedia.   It is quite old fashioned hence the mention of IQ but it is clear and concise.   Here is the full article https://en.wikipedia.org/wiki/Social_privilege

This concept is highly relevant to our lives, and crucially, understanding the lives of people who are different from us.   That is, if we all seek to make the lives of each and every one us better.

It can be applied to fat/thin existence.  To learn about your behaviour from the point of view of your privilege is hard to do because you can go through life blissfully unaware of its existence.   I had NO IDEA I had thin privilege: that it gave me access to the “top table” because I was not a victim of overt size discrimination, overt hatred or low level meanness and cruelty.  I can buy clothes in mainstream shops, sit in the chair in any café, not fear judgement in everything I do, and generally trip trap through life without a care in the world

It’s not all a Win for the Thin

Of course Thinies do have a care in the world because we are all victims of diet culture and size obsession but that is a different debate.  Wanting to be thin-er, or a different shape because we worship at the alter of the KKK, that is, Kim, Kylie and Khloé is distinct from actual discrimination on grounds of being a size 24

So back to my Thin Privilege.  I didn’t understand that the world was a very different place if you were fat.

Did not know, did not understand, did not even think to find out because I didn’t know it existed.

Some of you will say: “Didn’t anyone tell you all of this”.  No they didn’t.    Or did they? Maybe I didn’t listen or didn’t listen carefully?

What Should I Do to make Pilates more fat positive?

Checklist for the Website/Social media

So there you have it.

Some years  ago I gave up thinking that I had life sussed out.  The more I know the more I seem to realise I don’t know very much.  This whole journey is a spectacularly good example and of course I still don’t know all the answers.   If you have advice or your own views or personal experience to share with me, please do reply.

As I complete this post it is January 1st 2021.  What on earth will this year teach us all? 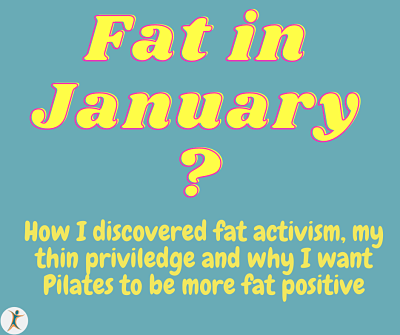 3 thoughts on “Fat In January: How I discovered Fat Activism and now aim for Fat Positive Pilates”