Breathing …..We take it utterly for granted most of the time….even during Pilates or other exercise sessions

Our lungs:  we really should pay them more attention and respect.

But they aren’t sexy are they?  Like the glutes.

Or trendy, like the liver – forever being detoxed to within an inch of it’s hepatic life.

No,  the lungs, despite their size and central location, lie forgotten, breathing quietly away, whilst we monitor our foreheads for wrinkles, (or is that just me?).

Even the word lung is rather dour and unappealing.

Lets be inspired, both literally and metaphorically

The primary muscle of breathing is the diaphragm – a sheet of muscle that divides the heart and lung cavity from the other internal organs.     In order to breathe in  (a process also referred to as inspiration or inhalation), the diaphragm contracts and flattens downwards.  It is assisted by the muscles around the ribs: the external intercostals, which pull the ribcage up and out.   This results in a pressure change within the system.  The pressure increases, thus drawing air into the lungs.  In terms of muscular work, the in-breath is the more active breath. The out-breath is more passive: the diaphragm and external intercostals relax and the air is gently expelled from the lungs in order to equalise the air pressure between the lungs and outside the body.

In order for the diaphragm to have room to contract and flatten down, the internal organs have to move out of the way slightly.  So, with each contraction of the diaphragm, both the pelvic floor and the abdominal muscles have to relax to accommodate this small change in the position of the organs (mostly the digestive system).  This is one reason why you shouldn’t try and contract your pelvic floor or “pull in your abs” as you exercise.  This runs counter to how your body works.  Each time you breathe in your abs relax and as your breathe out they contract slightly. 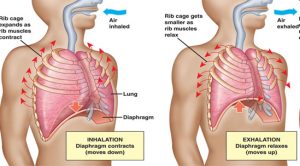 During intense physical activity the body uses extra muscles to achieve forced inhalation (and forced exhalation) which can really increase the size of the thorax (the space that the lungs and heart sit inside) in three dimensions .  The lungs can expand more, more air can be breathed in and therefore more Oxygen can reach the tissues and Carbon Dioxide be taken away.   The muscles that assist when we’re working our muscles at high intensity are

Diaphragmatic breathing is primary breathing and it is how we should breathe most of the time.

However,  much of the time we have a tendency to use a secondary breathing pattern.

Secondary breathing has an over reliance on the assistive breathing muscles in the neck and upper body.  People with chronic breathing diseases such as bronchitis or emphysema  rely upon them.  The rest of us shouldn’t though.

Why is it that we end up with faulty breathing patterns?

Inefficient breathing into the top of the lungs can lead to chronic tightness in the upper chest which can then cause tightness radiating into the upper back, shoulder blade elevation, neck tightness.   Many people suffer with this, and possibly attribute their problems to posture, over use of computers etc.  Maybe this is the case, but don’t over look the tendency to use secondary breathing as a cause.

And it’s not just chest tightness that could be a problem.   Failing to use the diaphragm properly can mean that  the lungs don’t fill up properly causing subtle metabolic changes in the body because oxygen uptake and carbon dioxide release is affected.  Our bodies are capable of adapting but they shouldn’t have to.  This is a subtle, hidden compromise that all the Chia seeds in the world can’t compensate for .

What can we do about all of this?

Lying down on your back (if you have time ha ha)  or when you’re in  bed is a great position to focus on lovely calm, steady diaphragmatic breathing.

It helps breathing, and also the muscular-skeletal system to maintain good posture.  For the most part, avoid slumping forwards because this impedes the expansion of the ribs: Sit or stand tall with the spine long and with no obvious tension in the muscles.  Soften your breast bone and rib cage.   No tensing the stomach muscles.  They will contract slightly with each out breath.

When and if you practice mindfulness, or if you’re thinking of starting, focussing on the breathing is a really lovely “entry level” task.  The purpose here is to use the breathing to quiet the mind, but there is an added bonus – it helps gives you a greater awareness of your breathing and simply reminds you that it is happening!   Meditation also harnesses the subtle and gentle power of this vital, constant presence in  our bodies.

Click here for a link to a mindful breathing exercise.

Do Pilates regularly!   Pilates provides an ideal opportunity to focus not just on the exercises but your breathing as well.

Yoga would be equally helpful and likewise other forms of exercises such as T’ai Chi or Qi Gong.    Indeed, these Eastern traditions have retained and promoted an understanding of the importance of breathing properly.    Prana in the name given to the vital, life sustaining energy  in the spiritual and healing systems of India.   It is a notion similar to the Chinese qi, the Japanese ki, and the Ancient Greek pneuma.    It has  the qualities of a nutrient that can be taken into the body.    Because prana is present in the air,  breathing exercises are believed to have a central role in promoting health.

How does Breathing Influence and Assist Pilates?

Well first and foremost the breath should match the requirements of the exercise.  In addition:

breathe… you got to OUT de air to IN de air!

A few years ago when my daughter was only about 2½ we were walking to her nursery – quite fast and up a steep hill.  She suddenly stopped and said:

Mummy I’ve run out of breathe!

for your fundamental well being: physiological, metabolic and emotional

to allay anxiety, quiet the mind

which in turn will help the first two…..

Never run out of breathe